Schnee’s eye and imagination have brought colorful, abstract textiles and designs into personal, commercial and civic spaces in the post-World War II era. From living rooms, fitting rooms and hospital rooms to museums, showrooms and skyscrapers, her textiles appear in the most intimate and the most iconic settings.

Schnee joins six other artists who, since 2008, have received the Kresge Eminent Artist award recognition of professional achievements, contributions to metropolitan Detroit’s cultural community and dedication to Detroit and its residents. The award includes a $50,000 prize.“Ruth Adler Schnee has been a pioneer not only in defining the modern look of architectural interiors, but also in redefining postwar America’s sense of public space,” says Rip Rapson, Kresge’s president and chief executive officer. “Her work and her influence also reach intimately into homes here in Southeast Michigan and across the country, where she may not be a widely recognized name, but has brought the crisp look and feel of the modern design era.” 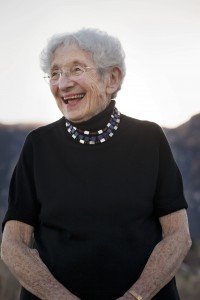 Schnee’s work elevated Michigan’s stature in modern design and architecture. She worked on the General Motors Technical Center in Warren (with architect Eero Saarinen in 1950-55), the World Trade Center (with Minoru Yamasaki in 1970-77) and the update of Albert Kahn’s Ford Rotunda in Dearborn, which she worked on in 1952-53. The Adler-Schnee store in Detroit – a partnership with her late husband, Edward Schnee – opened in 1948 as one of the first shops in the nation to sell modern home fabrics and furnishings to the public. She still designs custom fabrics for KnollTextiles, where she holds a 20-year contract, and Anzea Textiles, an upholstery company.

At 91, she continues to work most of the year from her studio in Southfield, a suburb of Detroit.

“I do the work because I love it,” she says. “And now to be recognized that my work has some quality to it, it’s very exciting to me. It’s incredible,” Schee says of this latest honor.

Schnee’s textiles are in the collections of The Henry Ford, the Art Institute of Chicago, Cranbrook Art Museum, and the Detroit Institute of Arts, among other institutions. Her work has been showcased in numerous exhibits, including last year’s group exhibition at the Contemporary Jewish Museum in San Francisco, “Designing Home: Jews and Midcentury Modernism,” and the solo exhibition “Ruth Adler Schnee: A Passion for Color,” shown in conjunction with the 2011 Venice Biennale. A documentary film, “The Radiant Sun: Designer Ruth Adler Schnee,” directed by Terri Sarris, was released in 2012. Schnee’s daughter, Anita, conducted an extensive oral history interview in 2002 that is housed in the Smithsonian’s Archives of American Art.

“As an immigrant who launched an influential business in Detroit, as a woman who broke through barriers in a male-dominated field, as a Detroiter who helped shape an international sensibility, her story speaks to the value of  inclusiveness, to the entrepreneurial spirit and to the profound role the arts play in nurturing our souls,” Rapson says.

Schnee was born Ruth Adler in Frankfurt, Germany, in 1923. Her family soon after moved to Düsseldorf. Schnee’s parents exposed her to art, music and design early, as evidenced in the detailed drawings of interiors she made as a child. An accomplished artist in her own right, Schnee’s mother studied calligraphy at the influential Bauhaus school of design. The artist Paul Klee was a family friend, and as a child Ruth spent many days playing with mobiles on the floor of his studio.The Adler home was decorated with an eclectic array of contemporary and traditional art and furniture.

That home was destroyed – and with it any sense of a future for the Adlers in Germany – in the Nazis’ Kristallnacht pogrom against Jewish homes and institutions in November 1938. The family salvaged what it could and the following year fled to the United States, settling in Detroit. In the interview with her daughter, Schnee recalls the central role that art played in her upbringing: “We came to Detroit without a job or money, and before looking for a job my parents took us to the Detroit art institute.”

Schnee studied art at Cass Technical High School. “I simply blossomed when I got to Cass,” she says, “because it was my love. … I just went wild.” 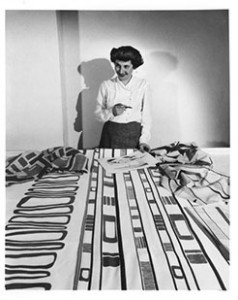 In 1942, she was awarded a full four-year scholarship to the Rhode Island School of Design (RISD). While there she traveled to Harvard to attend lectures by Bauhaus founder Walter Gropius, who was head of the architecture school there.

After graduating from RISD, she worked in New York with the renowned industrial designer Raymond Loewy. In 1945, Schnee returned to Michigan on a one-year fellowship to attend Cranbrook Academy of Art in Bloomfield Hills, where she was the first woman to earn a graduate degree in architecture. Eliel Saarinen, department head and Schnee’s mentor, instilled the importance of entering competitions as a means to establishing a noteworthy career. Winning a Chicago Tribune residential design competition in 1946 launched Schnee’s career in custom fabric design.

“The competition was to design a house encompassing all the modern gadgets that were designed during the war but had just come on the market,” Schnee recalls. “My house was designed in glass and steel with large open spaces in the Mies van der Rohe style, but I could not find fabrics to fit the house. Everything on the market was French provincial. So I designed my own drapery fabric.”

That work, the foundation of her textiles to come, led to commissions from the architecture firm Shaw, Ness & Murphy, which was designing automotive showrooms.

A self-taught silkscreen printer, Schnee established an interior design and printing studio for custom textiles in 1947, occupying a storefront space on 12th Street in Detroit. She worked with such clients as future shopping mall magnate Alfred Taubman and her friend, architect Louis Redstone, while displaying and selling a small selection of furniture and wares by esteemed modernist colleagues. Other collaborators included George Nelson, Warren Platner and Frank Lloyd Wright, all major architects and designers of midcentury modernism.

The following year she met and married Edward Schnee, a graduate of the Yale School of Economics, who became a lifelong partner in business. Together, they moved to a larger space on Puritan Street and officially launched a retail establishment, the Adler-Schnee store. It was one of the first in the United States to sell modern furniture, fabrics and home furnishings to the public – everything from cooking utensils to unique art objects.

After a fire at the store, they moved to Livernois Avenue across from University of Detroit, enticed by the proximity to the university’s architecture program, and then downtown to the historic Hemmeter Building in Detroit’s Harmonie Park. The store and name were sold in 1977, and the couple continued to work as interior design and space consultants under the name Schnee & Schnee. Throughout her career, Schnee has credited her husband for not only his business savvy, but also for his creativity and insight that found its way inside her art.

She claims it was Edward, for instance, who had the brilliantly simple idea early on to give each of her fabrics a friendly name referencing its inspiration: thus the likes of “Pins and Needles,” “Country Fair” and “Lazy Leaves.” Schnee was one of the modernists whose work can never be called cold.

Customers were slow to respond, however, preferring the mass market styles sold in department stores. Still, Schnee was dedicated to her ideas and continued production; her husband found deep satisfaction at the store, educating the public about fresh, independent design that included work by craftsmen the couple discovered while visiting friends in Mexico.

“We just couldn’t earn a living in the early days,” she says, “but I was inspired by art and nature. It’s a simple thing, but true.”

Even if sales began slowly, the artisanal objects sold at Adler-Schnee became more common in kitchens and living rooms across the metro area. The store represented a portal through which art education entered urban and suburban households – and the Schnees were the teachers. 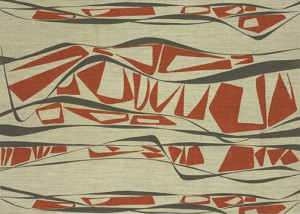 Schnee says she still believes that one of the best lessons to learn about creativity is the importance of being observant. The everyday environment is a wellspring that nourished her career. She continues to impart one piece of advice: “You have to look at things, see things,” she says. “Everything around us is a design that can be put on paper, as a design: the simpler, the better.”

The Kresge Eminent Artist award is unrestricted and is given annually to an artist who has lived and worked in Wayne, Oakland or Macomb counties for a significant number of years. In addition to the cash prize, the award includes the creation of a monograph commemorating the artist’s life and work.

The 2015 recipient was selected by the Kresge Arts in Detroit Advisory Council, a volunteer group of leaders in the metropolitan Detroit cultural community. Its members are:

For additional information about the 2015 Kresge Eminent Artist, The Kresge Foundation or its Detroit Program, please contact W. Kim Heron, or call 248-643-9630.