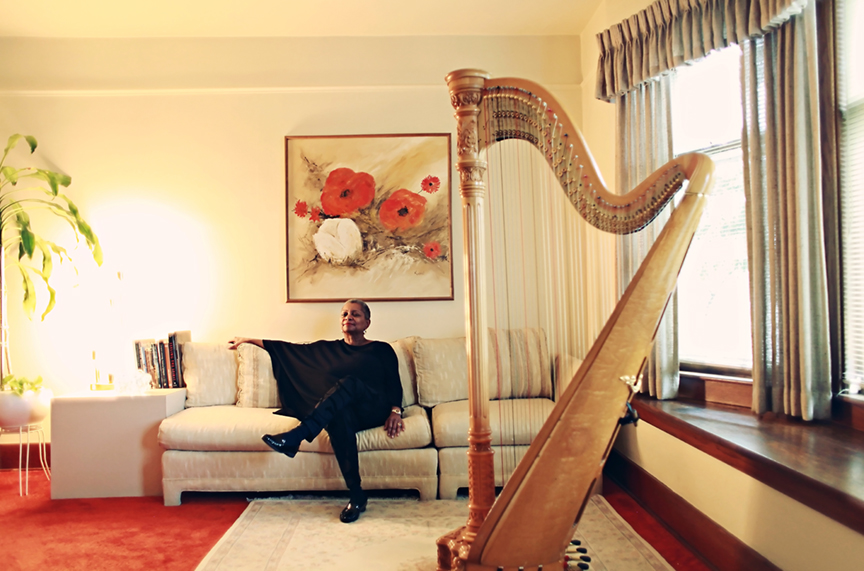 Patricia Terry-Ross has been named the 2017 Kresge Eminent Artist. As a harpist, vocalist and lifelong teacher, Terry-Ross’ virtuosity, passion and integrity have placed her center stage in Detroit’s unique legacies of performance and music education that span nearly a century.

Terry-Ross has been principal harpist at the Michigan Opera Theatre for 40 years – virtually its entire existence. She first performed with Michigan Opera Theatre in 1976, when the company was just five years old, and later became principal harpist.  Memorable shows include several with tenor Luciano Pavarotti, The Three Tenors (Placido Domingo, Jose Carreras, and Pavarotti), the opening of the Detroit Opera House in 1996, and the world premieres of Richard Danielpour and Toni Morrison’s opera “Margaret Garner” as well as “Cyrano,” composed by MOT’s Artistic Director David DiChiera, a 2013 Kresge Eminent Artist Award recipient.

She has played on numerous occasions with the Detroit Symphony Orchestra under three musical directors, and her characteristically warm and deep sound can be heard on many Motown tracks of the 1970s, including recordings by Marvin Gaye and the Temptations.

Throughout her career Terry-Ross has performed across the country. She was one of three harpists to play Brahms’ “Ein Deutsches Requiem” with the Detroit Symphony Orchestra at both Carnegie Hall and the Kennedy Center in the late 1970s. She was also one of three harpists to perform on the Grammy-nominated recording of “The Firebird Suite” (Igor Stravinsky) in the early 1980s, during the tenure of conductor Antal Dorati. She has performed on numerous occasions with the orchestra under the leadership of Neeme Järvi and current musical director Leonard Slatkin in addition to Dorati. She has been a soloist with the Detroit Symphony in their Educational Concert series and with the Kalamazoo, Dearborn, Warren, Wayne State University and former Michigan Chamber orchestras.

“When I received the news, I was shocked,” Terry-Ross says. “I have never lived my life seeking things out. My grandmother used to always say to me, ‘You were given a gift. But it’s not a gift unless you give it away.’ And I have always believed that if you just do honor to your gift, things will happen.”

Patricia Terry-Ross grew up near the Boston-Edison historic district in Detroit. Her parents recognized her talent when she was singing and dancing before she left the crib. At age 5, she began formal training in piano. She made her television debut a year later with a piano solo on “The Auntie Dee Show” on WXYZ-TV Detroit. At age 7, her parents enrolled her at the Detroit Conservatory of Music, where she continued taking classes until college.

Throughout elementary school, junior high and high school, teachers praised Terry-Ross’ aptitude for any instrument they handed her, which included violin and timpani. But it wasn’t until she started at Cass Technical High School that she found her true passion. At Cass Tech, Terry-Ross studied under esteemed instructor Velma Froude, a Cass alumna herself, who also taught the jazz world’s pioneering harp stars Dorothy Ashby and Alice Coltrane, and the contemporary experimentalist Zeena Parkins, to name a few.

“Had I not gone to Cass Tech, I would not be a harpist. I loved the sound. There was nothing like it. The sound of a harp string is immediate. Something about it made me feel that, as much as I loved to sing and play other instruments, I could sing a different kind of song.”

Terry-Ross attended the University of Michigan, where she received a bachelor’s degree in choral music education; continuing in the master’s program with a full-ride scholarship, she graduated in 1967 as a double major in choral music education and harp performance. While completing her graduate studies, she attended the Tanglewood Institute, Boston University’s highly regarded training program for aspiring musicians. During summers, she practiced at the home of Dorothy Ashby on Ashby’s own instrument, which the jazz artist made available to Terry-Ross so she could hone her craft just five blocks from home.

She began her career as an instructor in 1969 at the former Pattengill Elementary on Detroit’s west side, and stayed there for seven years before receiving an important phone call. It seemed that Velma Froude was retiring soon and had told Detroit Public Schools Director of Music Education William Koerper she was adamant that Terry-Ross should continue her mission at Cass.

Terry-Ross was hired in January 1976 and spent 31 years at the helm of Cass Technical High School’s Harp and Vocal Ensemble, a hallmark program of the legendary music education department that has spawned stellar talents for decades.

She has been recognized nationally, and at the state and local levels, as a musical educator who has empowered generations of students to become influential artists and educators in their own right. Terry-Ross’ former students include teachers, performing professionals and notables in the world of classical instrumental music, opera and jazz. Currently, Terry-Ross is an adjunct associate professor of harp, choral conducting and vocal music education at Wayne State University. She continues to perform with MOT and in her chamber music group, the Eason Trio.

Terry-Ross, 70, joins eight other metropolitan-area artists who, since 2008, have received the award and $50,000 prize in recognition of professional achievements in their medium, contributions to the cultural community and dedication to Detroit and its residents. The award also includes the creation of an artist monograph which will be released at a public event later this year.

“Patricia Terry-Ross is an unsung musical hero in Detroit, and it’s well time to recognize and sing her praises,” says Kresge President and CEO Rip Rapson.  “From her work on Motown sessions to decades of performances as principal harpist with the Michigan Opera Theatre, her sound has enriched our lives without most of us knowing her name. Moreover, she is the exemplar of artist-teachers in our community, those who both create at the highest level while nurturing the gifts of others to carry the torch forward.”

“Among our core beliefs at The Kresge Foundation is that a thriving arts and cultural community enriches the quality of life in numerous ways,” adds Rapson. “The Kresge Arts in Detroit Advisory Council has again recognized an artist whose artistry, conviction and generosity have made her a role model for many, and who deserves to be a role model for more of us still.”

Kresge’s Eminent Artist Award is a funded by Kresge’s Detroit Program, which uses grantmaking and social investing to promote long-term, equitable opportunity in the foundation’s hometown.  The Eminent Artist Award, Kresge Artist Fellowships and Gilda Awards for emerging artists are administered by the Kresge Arts in Detroit office at the College for Creative Studies in Detroit.

“From a young age, it was clear that Patricia Terry-Ross was gifted with a unique talent for music that could take her anywhere,” says College for Creative Studies President Richard L. Rogers. “Throughout her life, she has shared that gift generously, working with a dazzling array of iconic musicians, uplifting audiences in Detroit and far beyond, and guiding students – from Cass Tech to Wayne State – to develop and share their own gifts. CCS is honored to partner with The Kresge Foundation to highlight artists whose exceptional contributions are integral to the vibrancy of Detroit’s cultural environment. As an art and design college committed to relentless creativity as an educational vehicle, it is particularly heartwarming to celebrate 2017 Kresge Eminent Artist Patricia Terry-Ross, a musician whose talent and passion have taken her to countless stages and personal heights, while never detracting from her main stage role in the music education of Detroit students.”

The Kresge Eminent Artist award is an unrestricted grant and is given annually to an artist who has lived and worked in Wayne, Oakland or Macomb counties for a significant number of years. In addition to the cash prize, the award includes the creation of a monograph commemorating the artist’s life and work, which is distributed to the public for free.

The 2017 recipient was selected by the Kresge Arts in Detroit Advisory Council, a volunteer group of leaders in the metropolitan Detroit cultural community. Its members are: