Kresge Arts in Detroit is honored to announce Dr. Gloria House as the 2019 Kresge Eminent Artist. House is the 11th artist to receive the lifetime achievement award, which includes a $50,000 no-strings-attached prize. The honor recognizes an individual’s distinguished record of high quality work and professional achievement in the arts, significant impact on their chosen art form, and generous contribution to the growth and vibrancy of Detroit’s cultural environment.

House has published four poetry collections, Blood River (1983), Rainrituals (1989), Shrines (2003), and Medicine (2017) under her chosen name, Aneb Kgositsile. “For me, the poetry always found its way through all the other things I did – working full time, building community institutions, raising my son,” House says. “I couldn’t ever set time aside just for writing because I had so many other commitments. I have never set out to write a manuscript.  The poems have just made their way through all of the other concerns.”

Dr. House was born in Tampa, Florida. She
began writing poetry as a child, inspired by
Paul Laurence Dunbar, as well as by the
powerful words of James Weldon Johnson’s
“Lift Every Voice and Sing,” commonly referred
to as the Black National Anthem.

A student of French literature, House received a diploma in French studies from the Monterey Institute of Foreign Studies in California by the time she was 18, believing that she was setting out for a career in international relations. After she was awarded a bachelor’s degree from the University of California, Berkeley in French with a minor in political science, she completed the Cours Pédagogique program at the Alliance Française in Paris, where she met African students engaged in political activities that energized and inspired her.

“They were concerned about revolutionary movements in their countries and they educated me about colonialism,” House recalls. “In Paris I started to see myself as belonging to that larger African diaspora. When I came back to Berkeley to start my master’s degree, I was in a different space because I was seeing the role of the United States from a very different perspective.”

While working on her graduate degree in comparative literature at Berkeley, she became involved in the Free Speech Movement, a major student demonstration that included a campus-wide boycott of classes, with students demanding their freedom to exercise political views and rights on campus. House left campus during the summer of 1965 to teach in a freedom school in Selma, Alabama. There she was introduced to the young organizers of the Student Non-Violent Coordinating Committee (SNCC). While picketing, she was arrested in Lowndes County. A friend who had been arrested at the same time was murdered upon the group’s release; another was critically wounded.

She spent two years as a field secretary with the Student Non-Violent Coordinating Committee, during which time she drafted the SNCC statement against the Vietnam War. Looking back on that work now, House says she couldn’t have understood the legacy that SNCC’s work would establish. 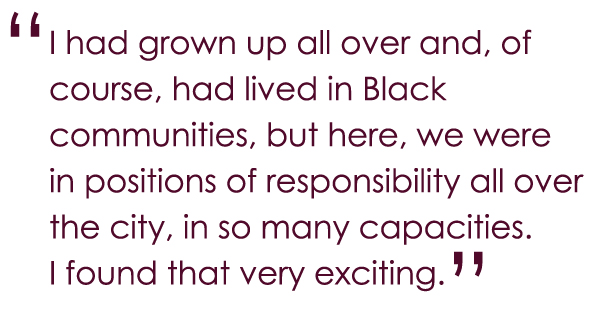 House moved to Detroit in 1967. “My first impressions of Detroit were very positive. I loved the city. The whole city was enveloped in Motown music. It was my first time being in a majority Black city. I had grown up all over and, of course, had lived in Black communities, but here, we were in positions of responsibility all over the city, in so many capacities.  I found that very exciting.”

House taught French language and advanced composition at Cass Technical High School and served as an editor at the Detroit Free Press before beginning a lifelong career as a university-level educator, receiving her Ph.D. in American culture/history from the University of Michigan, Ann Arbor. At Wayne State University, House was a professor of African American literature, American culture, and research methods, and was co-chair of the WSU Black Caucus. At the University of Michigan-Dearborn, she designed curriculum for the major in African American and African Studies (AAAS) and served as the program director. She was also a visiting professor in the English Department at the University of Witwatersrand in South Africa from 1992-1995. Dr. House won the President’s Award for Excellence in Teaching at Wayne State University, where she was also named associate professor emerita in 1998.

While teaching, she continued her political activism as co-founder of the Detroit Coalition Against Police Brutality and the Justice for Cuba Coalition, and helped to form three African-centered schools in Detroit, among other activities. Renowned for her social justice work, House has received numerous honors, including the Lifetime Civil Rights Activist Award from the Michigan Coalition for Human Rights (2017) and the Harriet Tubman Award from the National Organization of Women, Wayne County Chapter (2011).

House’s own conception of her lifelong career as an artist has evolved gradually over time. “I never really identified with the narrow definition of a poet as someone who writes in a solitary life, then stands in front of people and reads,” she explains. “My life didn’t evolve that way.”

In reading Nubia Kai’s book Kuma Malinke Historiography (2014) about the griot in West African cultures, House says she found described there the role that aligns with her own work. “In traditional African societies, the poet has so many functions – responding to the concerns of the community. I realized I belong to that tradition. I have been living that way of being a poet.” 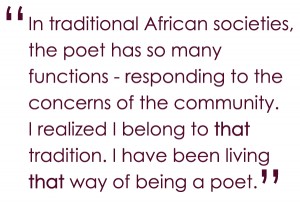 “Dr. House is an unrelenting, unapologetic teacher. That truth is at the core of her art, her politics, and her interpersonal relationships. She instructs through her depictions of her uncanny insight in the workings of the human heart, her mastery of language, her dedication to mining each moment for its humanity, and by her composed demeanor,” says 2011 Kresge Eminent Artist Bill Harris. “For the past half century, she has dedicated herself to the cause of the need for the equal treatment of all. This well-deserved Kresge Eminent Artist Award will serve as a belated introduction to an even wider circle of admirers of this quiet, selfless, but fierce warrior.”

“I was stunned to receive news of the award,” House says. “What is so special about it is to have the award conferred by a circle of artists. That kind of affirmation feels wonderful. My work is so clearly political, yet they have seen the beauty of it.”

Since retiring from teaching full-time in 2014, House has served as a co-editor of Riverwise quarterly magazine and as a collaborator with Broadside Lotus Press, where she has worked in various capacities for more than 40 years. She is a participant in We the People of Detroit, a citizen collective engaged in education and advocacy work surrounding the local water shutoff crisis, liberatory education, and land use justice. Additionally, House is active in the Detroit Independent Freedom Schools Movement, a community effort to teach African American culture to Detroit students affected by the destabilization of the public school system.

“As a poet, activist, and educator, Dr. House’s multidimensional career exemplifies the talent, vision, and influence that the Kresge Eminent Artist Award exists to recognize,” says College for Creative Studies President Richard L. Rogers. “CCS is honored to partner with The Kresge Foundation to celebrate Dr. House’s lifelong commitment to creativity and the advancement of human rights.”