Hailing from Detroit, Aisha Ellis is a local drummer, percussionist, and more. As of 2017, she is the recording and performing drummer for international recording artist Les Nubians and Mahogany Jones. She has been the co-drummer and recently the percussionist for jessica Care moore’s “Black Women Rock” for the past several years. She’s affectionately known as drumlova or time keepa and was the drummer for the Detroit based hip-hop band YiN which was the offspring of all female band Lola Valley. For the past 3 years, she’s been the drummer for Mollywop, a Detroit-based multi-genre band. 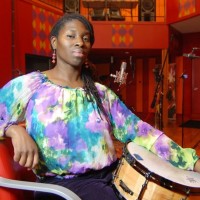