Aja Salakastar Dier, AKA Salakastar, is a multidisciplinary performance artist. She earned her BFA and completed her classical acting training at the acting conservatory at the State University of New York at Purchase College. After living and working in New York City, she moved to her hometown of Detroit and was (re)embraced by Detroit’s arts community. She is exploring experimental work in theatre as an ensemble member of A Host of People, in music as a vocalist and songwriter with Video7, and in writing with iii Sisters, a Detroit-based black feminist writing ensemble.

Salakastar is the recipient of a 2020 Kresge Artist Fellowship in Live Arts awarded by Kresge Arts in Detroit. She is the first artist to receive both a Gilda Award and a fellowship. 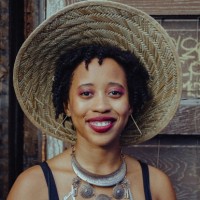