Ian Finkelstein began studying classical piano at age four, focusing solely on jazz from age 12 and gigging professionally from age 14. He received mentorship from many of Detroit’s jazz luminaries including Rodney Whitaker, Marcus Belgrave, and Tad Weed. Finkelstein went on to study with Geri Allen at the University of Michigan School of Music, Theatre & Dance, graduating in 2013 with BFAs in jazz piano performance and performing arts technology. Upon returning to the Detroit area, he began performing and recording regularly while continuing to advance his studies in piano and music production. In 2018, he founded a record label called Freak Press. Finkelstein’s playing can be heard on projects by artists such as Black Milk, Robert Hurst, Omar-S, Waajeed, and Shigeto. He has performed with artists such as Esperanza Spalding, Terri Lyne Carrington, Benny Golson, Karriem Riggins, Dee Dee Bridgewater, and Savion Glover. 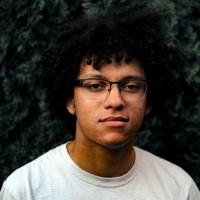