Maia Asshaq is an Iraqi-born writer, book-maker, and bookshop owner based in Detroit. Her work has been exhibited and heard in Detroit, Chicago, New York, France, Croatia, Germany, and the Czech Republic. She is heavily influenced by different forms of communication and mis-communication through paper and translations. Most recently this interest inspired her to translate and mis-translate the poetry of her Assyrian-American uncle, Yousif Shikwana. In 2012, Assaq co-founded DittoDitto, a small bookshop and publishing house in Detroit that focuses on literary and visual arts. In 2013, she co-founded an experimental poetry and performance series called Underword. 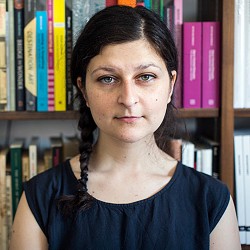