Alex Way began playing violin at 12 years old and singing professionally at 19. She has performed with internationally-acclaimed artists, including Marcus Belgrave, Al McKenzie, and Chinelo Amen-Ra. Alex released her first single, “C.N.L.L. (Cry Now Laugh Later),” in 2015 and her first EP, “Phases,” in 2016. Since then, she has performed in numerous local and national venues and festivals. Alex is now moving forward to her next project, to be announced. 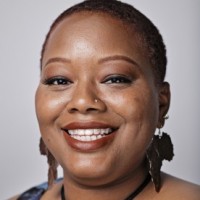