Brandon Walley is a filmmaker and curator based in Detroit, Michigan. He creates 16mm, Super 8mm, and digital films that explore the abstractions between humanity, ecology, industry, and technology. For over a decade, his films have been screened widely in festivals, museums, and cinematheques including Kunsthaus Graz (Austria), Strangloscope (Brazil), Rooftop Film (NYC), Museum of Contemporary Art Detroit, Iowa City Experimental Film Festival, Ann Arbor Film Festival, and more. Brandon has taught film production at various institutions including the College for Creative Studies, Lawrence Technological University, and YArts of Metro Detroit. He is former Program Director of Corktown Cinema and former Co-Director of the Detroit Film Centre. Brandon has been Media City Film Festival’s Regional Artists’ Curator since 2008, is head of the festival Screening Committee, and is the organization’s Board Chair. 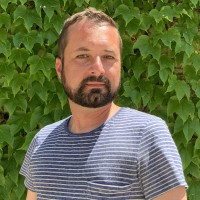