Carl George is an artist and activist working in experimental film, painting, and collage. His short experimental films have been shown in festivals internationally and are in the permanent collections of the Museum of Modern Art, The Whitney Museum of American Art, Guggenheim Museum, and the New York Public Library. George’s short film, “The Lost 40 Days” (1986), has been digitized with the assistance of the National Film Preservation Foundation and is now in the permanent collections of the National Film Archive at the Library of Congress and Anthology Film Archives in New York. 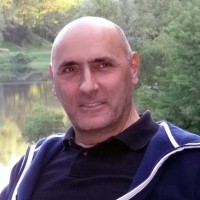