Chris Pottinger is a musician and visual artist residing in the metro Detroit area who creates music using synthesizers, unusual electronic instruments and the saxophone. Performing solo under the name Cotton Museum, Chris’ project began in 2002, developed from his interest in experimental electronic sounds. His recordings have been released locally under his own label, Tasty Soil Records, and through various labels in countries such as Italy, the United Kingdom and Egypt. Cotton Museum’s name stems from the deformed lumpy beasts that adorn the album covers, and the sounds created are inspired by the artwork that he’s developed to enhance each release. 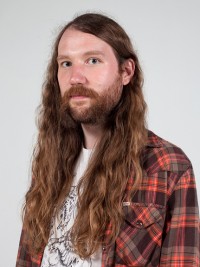