Annica Cuppetelli and Cristobal Mendoza began collaborating as Cuppetelli and Mendoza in 2010. Based in Detroit, their work has been exhibited in the Denver Art Museum, the Bienal de Video y Artes Mediales in Chile and in festivals such as Nemo 2013 (France), Scopitone 2012 (France), ISEA 2012 (New Mexico), FILE 2011 (Brazil), FAD 2011 (Brazil) and video_dumbo 2013 and 2011 (New York). Cuppetelli received a MFA in Fibers from Cranbrook Academy of Art. Mendoza received a MFA in Digital + Media from the Rhode Island School of Design. 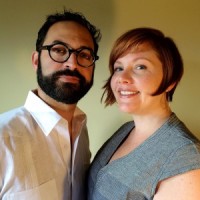