Daniel Land is a Detroit-based filmmaker and visual artist. He completed his first feature-length motion picture in high school, and has since begun others while directing music videos, commercials, and an array of narrative, documentary, animated and experimental short films. As a visual effects supervisor, and entrepreneur through his Unit Circle Ltd., he has led teams of artists to design and deliver purposeful VFX imagery for television and Hollywood feature films. Land, via artist Gabriel Hall, has co-created narrative projection-mapping installations on both the Detroit Public Library and within the Detroit Institute of Arts, and performs annually as a VJ at the Movement Electronic Music Festival. 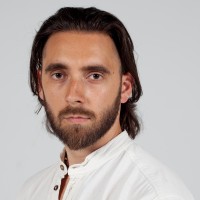