Danny Kroha is a singer, songwriter, guitar player, record producer, and performer who has been working and performing in Detroit since the 1980s. In the last thirty years, he has been a member of 8 bands, including the influential blues-punk group the Gories (singer and rhythm guitarist) and the minimalist, performance art garage trio the Demolition Doll Rods. Danny has recorded albums and singles which have been released by various record labels in the U.S. and Europe. His tours have taken him across the U.S., through Europe and to Brazil. His work has been extensively written about, including his first solo full-length album, Angels Watching Over Me, released in 2015, featuring traditional gospel, blues, and folk songs performed on a range of instruments including mouth harp, diddley bow, and slide guitar. 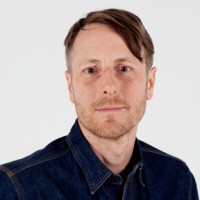