For more than 50 years poet George Tysh has combined innovative writing with community engagement on grass-roots and institutional levels. His work also reflects a keen interest in music, visual culture and world literature. Tysh’s numerous volumes of poetry, including The Slip (2015), The Imperfect (2010) and Dream Sites: A Visual Essay (1998), have been praised for combining “rigor, artifice, and intuition,” in the words of Brooklyn Rail reviewer Jeffrey Cyphers Wright. Tysh has also collaborated with the conceptual artists Sarkis and Christian Boltanski. He co-edited the project In Camera with his wife, Chris, and Blue Pig with David Ball, and has served as arts editor for Detroit’s Metro Times newspaper. His honors include a fellowship from the National Endowment for the Arts. From 1980 to 1991 he directed LINES: New Writing at the Detroit Institute of Arts. 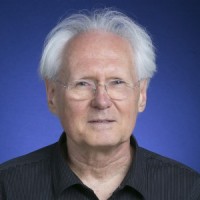