Invincible/ill Weaver is a Detroit based lyricist, performance artist, and organizer. As a co-founder of EMERGENCE Media, Invincible released their debut album ShapeShifters (2008) and produced award winning videos like The Revival (2009) about women in hip-hop, and Locusts (2008) resisting displacement and gentrification in Detroit. They performed globally for two decades, both as a solo artist, featured as part of the gender justice Hip-Hop collective ANOMOLIES, and in collaboration with Platinum Pied Pipers. They were a 2016 Knight Sundance Fellow, a United States Artists 2015 Fellow, a 2010 fellow of Kresge Arts in Detroit, and a 2009 fellow of the Ellen Stone Belic Institute for Women and Gender in the Arts and Media. Invincible continues to make work collectively with Complex Movements but currently does not perform or present solo. 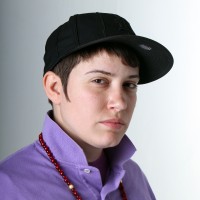