James J. Millross (aka Jimbo Easter) was born in Detroit and raised in Brightmoor. He began making art and performing at an early age. Fronting punk bands and touring nationally in the 1990s earned Jimbo a national cult following. As a musician and an artist, Jimbo uses a private mythology, developing a physical language to create an extremely visceral, raw, and emotional body of work. His work has been presented in local and national galleries. 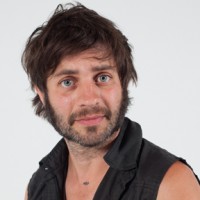