Karilú Alarcón Forshee was raised in Juárez, México. She began her artistic education at a young age at La Academia Municipal de Arte and has been performing ever since. Forshee is an interdisciplinary performing artist with a degree in theater arts and English-Spanish translation from the University of Texas (2009). She has been a Detroit-based performer and teaching artist since 2011, and a member of A Host of People theater company since 2013. Forshee currently works as a teaching artist for Living Arts Detroit, University Musical Society, and Mosaic Youth Theatre of Detroit. 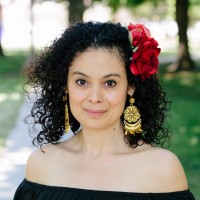