Recording and performance artist, educator, and activist Mahogany Jones is a lyrical force. Renowned as four-time, undefeated champion of BET’s “106 & Park” Freestyle Friday, in 2012 she was selected by the U.S. State Department’s Bureau of Educational and Cultural Affairs to tour internationally as a musical ambassador. Mahogany has since served in 11 countries. Mahogany is currently a writer-in-residence with InsideOut, and an instructor with D.I.M.E. (Detroit Institute of Musical Education). Frustrated with the objectification of women, Mahogany leveraged her latest release, “PURE,” to spearhead aPUREmovement in conjunction with GetJayne and What’sTheIrony productions, using media, events and campaigns to wage war against the mistreatment of women. Mahogany’s next album, “SugarWater,” will be released this summer. 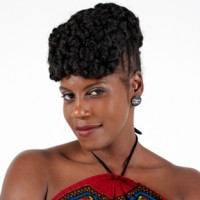