Marie T. Hermann is originally from Copenhagen, Denmark and now works in Detroit. She previously worked as a studio manager for the British artist Edmund de Waal. She studied at the Royal College of Art in London and received a Master of Fine Arts in 2009. Her solo exhibitions include Stillness in the Glorious Wilderness at Matin Gallery in Los Angeles and The only thing I can think about is yellow at Egg in London, among many others. Her work is represented in  numerous collections including the Sèvres Museum in France and the Jingdezhen Ceramics Museum in China. She was awarded a Danish Arts Foundation grant in 2009 and the Annie and Otto Johs Detlef’s Award for young, experimental ceramic artists in 2010. She is also a curator and co-director of Sixpm Project Space and a faculty member at the College for Creative Studies. 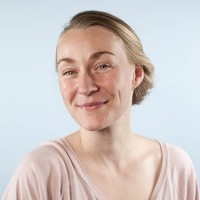