Peter Daniel Bernal grew up in Houston, Texas and graduated from the Kansas City Art Institute in 2000 with a BFA in painting. He received additional education at the Rhode Island School of Design and trained in printmaking and drawing in Weimar, Germany, where he lived from 2010 to 2015. In 2015, he relocated from Germany to Detroit. His primary focus is on storytelling-based oil painting but he also creates polychromed ceramic, linoleum prints, and pastels. In the past two years, he has completed several murals around Detroit, under the Perez pseudonym. 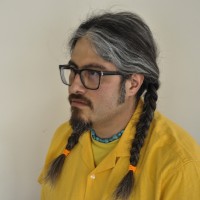