Richard Lewis was born in Detroit in 1966. He started drawing when he was four. When he was 10, his godmother told him to study his family and go into the next room and draw. That started him looking at faces. He graduated from Cass Technical High School in 1985. He earned his B.F.A. from College for Creative Studies and his Master’s degree from Yale School of Art. He came back to Detroit, drove a cab and taught African American art history. He was an artist-in-residence at The Studio Museum in Harlem. He moved back home to Detroit in 2002. 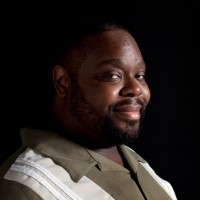