Born in Detroit in 1964, Russ Orlando received his Bachelor of Fine Arts from Wayne State University, Detroit and his Master of Fine Arts from Cranbrook Academy of Art, Bloomfield Hills, MI. His work is informed by the lure of the sell, shaped from his many years as an advertising agency art director. His sculptures and performances-which he calls experiences-often employ his body as a flash point for social criticism and a viewer’s self-examination. Detroit’s character and conflicts play a recurring role. 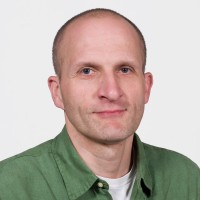