Salakastar is a Detroit born and based actor, singer-songwriter, poet, and teaching artist working in theatre, television, film, and music. She earned her BFA and completed her classical acting training at the State University of New York at Purchase College. She is an artist-in-residence at Poetic Societies, an ensemble member at A Host of People, and is in the touring company of I, Too, Sing America at the Michigan Opera Theatre. She is a founding member of iii Sisters, a Detroit-based feminist writing ensemble. Salakastar is the recipient of a 2018 Gilda Award in Live Arts awarded by Kresge Arts in Detroit. Salakastar is set to release her debut album, All Blue: Part One (Majorelle!), in 2020. 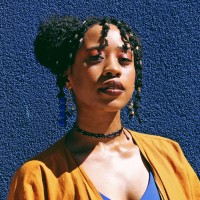