Shara Nova received a BA in Opera from the University of North Texas.   After moving to New York, she began studying composition with composer/performer Padma Newsome (Clogs, The National). During this time she composed music for several off-Broadway theater productions of plays by Adam Rapp and Jean-Paul Sartre.  In 2004, she assembled a band, My Brightest Diamond, and released Bring Me The Workhorse(2006), A Thousand Shark’s Teeth (2008) and All Things Will Unwind (2011) on Asthmatic Kitty Records.  Recent years have found Nova in the role of composer as much as songwriter.  She has received commissions from the chamber ensemble, yMusic; the Brooklyn Youth Chorus and the Young New Yorkers’ Chorus; the string quartet, Brooklyn Rider; and violist Nadia Sirota.  Additionally, many composers, songwriters and filmmakers have sought out Nova’s distinctive voice, including Sarah Kirkland Snider, Sufjan Stevens, The Blind Boys of Alabama, Laurie Anderson, The Decemberists, David Byrne & Fatboy Slim, as well as Matthew Ritchie & Matthew Barney. 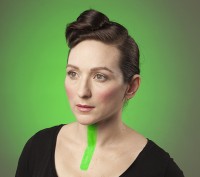