Shiva Ahmadi received her Bachelor of Fine Arts in painting from Azad University in Tehran, Iran, in 1998. Soon after she moved to the United States, Ahmadi earned Master of Fine Arts degrees from Wayne State University, Detroit, in 2003 and from Cranbrook Academy of Art, Bloomfield Hills, MI, in 2005. Since then, she has participated in many solo and group shows all over the United States and the world, including London and Dubai. Her work has been featured in The New York Times, The Boston Globe, Contemporary 21, L Magazine New York and The Metro Times. Ahmadi’s work was also included in The Chelsea Art Museum’s exhibition Iran Inside Out. 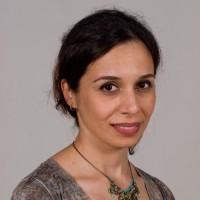