Born and raised in Detroit, Sydney began her career as an ad agency Art Director after earning her BFA from the College of Creative Studies in 2001. In 2004, Sydney relocated to Los Angeles to expand her career as a visual artist into the film and television industry. She returned to Detroit in 2011 and has since participated in many community arts projects, a Red Bull House of Art residency, and completed murals in Detroit, Atlanta, and Los Angeles. 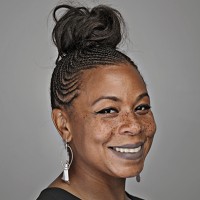