Tiff Massey is a Detroit-based artist whose primary medium is metal. She received a BS from Eastern Michigan University and a MFA in Metalsmithing from Cranbrook Academy of Art. She is an adjunct professor of Metalsmithing at Macomb Community College. Her work has been exhibited in South Africa, Belgium and the Netherlands. Massey was awarded the Michigan Chronicles “40-under-40″ award in 2014, and was an artist-in-residence at Detroit’s Red Bull House of Art. Her works are an observation of class, race and contemporary culture, viewed through the lens of African adornment and life in Detroit. 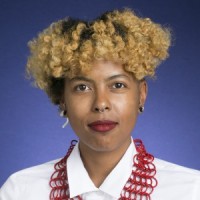