At fifteen, Timmy Lampinen needed a punk name. His brother Paul suggested “Timmy Vulgar,” and that’s where it all began. Lampinen’s music compositions are a representation of his life, imagination and creative being. He produces music to entertain a thought or idea that is best expressed sonically, giving listeners a heavy dose of insects, outer space, primitive cultures and prehistoric animals that is all encapsulated in the loud, raunchy, nuclear blast of his guitar. It’s a popular notion that the word vulgar means something offensive, lacking in taste. That’s easy. The real definition Lampinen strives for is “of the people.” 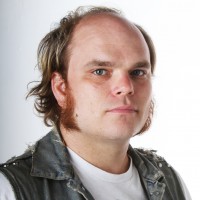