Razi Jafri is a visual artist, documentarian, and social activist based in Hamtramck. His work focuses on ethnicity, religion, immigration, democracy, and the changing cultural landscape in America. As a Muslim immigrant, his own community is of particular interest to him as it vies for a voice in the American cultural, economic, and political arenas amidst a climate of Islamophobia and anti-immigrant sentiment. Jafri’s documentary films include, “Hamtramck, USA,” which made its world premiere at the SXSW Film Festival (2020), “Ashura in Detroit,” which premiered at the Freep Film Festival (2021), and “Loyalty,” a 2022 Independent Television Service grantee currently in post-production. Razi holds a bachelor’s degree in engineering and an MFA from the University of Michigan. 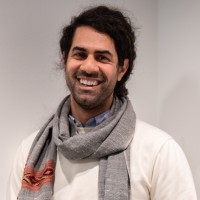