“Paintings are my diaries; drawings are my prose; collage is my poetry; assemblages are my dialogue,” notes artist, educator, arts advocate, and now 2021 Kresge Eminent Artist, Shirley Woodson.

A Detroiter since she was 3 months old, Woodson connected with her creative energy at a young age and is still able to vividly recall the excitement and wonder she encountered in her kindergarten art classroom. The lasting impact of that early creative spark is evident in her extensive educational experiences, including a BFA and MA from Wayne State University and additional graduate studies in painting and art history at the School of the Art Institute of Chicago.

Subsequent decades of success as an artist, paired with her exceptional and tireless commitment to ensure educational and career opportunities for all artists, have ensured the story of art in Detroit is far more inclusive and honest than it would have been without her efforts. It has also ensured her place as a revered and renowned pillar of Detroit’s creative community. Kresge Arts in Detroit is honored to shine a light on Woodson’s achievements and impact as she joins the esteemed group of artists who have received a Kresge Eminent Artist Award in honor of a lifetime of achievement.

Known for bold and expressive use of color and brush strokes in large-scale, figurative paintings, Woodson’s paintings have garnered attention from far and wide. In 1966, she received a prestigious MacDowell Fellowship. She used this opportunity to explore new ideas and techniques, including collage, a medium that continues to provide a counterpoint and complement to her paintings. Woodson has been featured in over 30 solo exhibitions, and her paintings are included in more than 20 permanent collections across the United States including, locally, the Detroit Institute of Arts and Charles H. Wright Museum of African American History. She is also featured in “The Art of Black American Women: Works of Twenty-Four Artists of the Twentieth Century” (McFarland Publishing, 1993) and “Gumbo Ya Ya: Anthology of Contemporary African-American Women Artists” (Midmarch Arts Press, 1995), among other books and publications.

Across six decades and parallel to her accomplishments as an artist, Woodson has also been an exceptionally dedicated and influential educator, arts advocate, and institution builder. She began teaching in Detroit Public Schools (DPS) in 1960, then taught at Highland Park Community College from 1966-1978. This was followed by contributions to Highland Park Schools as an art specialist from 1979-1992 before returning to DPS as supervisor of fine arts from 1992-2008.

In 1974, she co-founded the Michigan chapter of the National Conference of Artists (NCA), the longest-running national arts organization dedicated to nurturing, developing, and promoting opportunities for Black visual artists. Woodson’s work with the NCA is ongoing. She is an executive board member with the national organization and is the president of the Michigan chapter.

Woodson is revered across generations of Detroit artists for her exceptional contributions and lasting impact. Painter, CCS professor, and inaugural Kresge Artist Fellow Gilda Snowden (1954-2014) is one of many notable artists who benefitted from her mentorship and advocacy. A Detroit legacy in her own right (the Gilda Awards are named in her honor), this relationship exemplifies the exponential reach of Woodson’s vision, dedication, and impact.

The Kresge Eminent Artist Award is a $50,000 no strings attached prize. Each year, a new panel of local artists and arts professionals is convened and undertakes an extensive review process. We are consistently grateful for the time, insight, and expertise the panelists bring to the selection process. Woodson’s life and work clearly and thoroughly reflect the award criteria, including a distinguished record of high quality work, professional achievement, and significant impact in the arts, paired with generously sharing one’s talent, expertise, and contributions to the growth and vibrancy of Detroit’s cultural environment.

Upon receiving the award, Woodson noted that Detroit is fortunate to, “have an arts community that’s never stopped.” In large part, that is due to the unwavering commitment and decades of education and advocacy for which she is renowned, and we are thrilled to celebrate and uplift with the 2021 Kresge Eminent Artist Award. 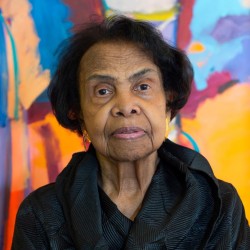