Daughter of two piano teachers, Summer Like The Season (Summer Krinsky) grew up with music permeating every aspect of her life. From childhood, Krinsky pursued serious classical piano studies. She added guitar and bass in early adolescence and, shortly thereafter, composed for her first rock band. Krinsky’s fascination with recording led her to the performing arts technology program at the University of Michigan. Following graduation, she moved to Detroit and became devoted to playing drums. In 2014, Krinsky started releasing music as Summer Like The Season, for which she writes, plays, sings, records, produces, and mixes. Krinsky’s highly personal approach to music speaks with a unique and inventive voice. 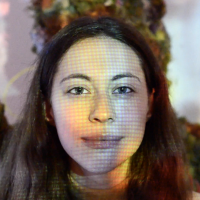