Teddy Dorsette III was raised in Detroit. His first exposure to the arts and filmmaking happened at home under the tutelage of his father; his training was later formalized with degrees from the University of Michigan and the Motion Picture Institute. As an intern, Dorsette helped to create major Deaf community box office hits like “SuperDeafy the Movie” before working for four years as a lead production assistant for the Deaf Professional Arts Network. Over the span of 14 years, he has created 35 music videos, two documentaries, six shorts, and one feature-length film. 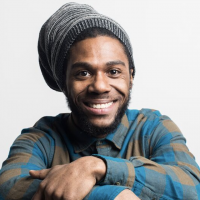